The source of heat

Paella cooking needs an adequate source of heat. One needs to remove the rice from the heat at a point where the grain has not burst (overcooked). To cook a paella over a fire, there are several devices. The oldest and most common, on which the paella rests level above the firewood, consists of a triangular iron contraption with three legs called trébede (in Spanish).
Slow burning wood used to be used for the fire and there are descriptions that mention orange wood. Lowland woods usually contain elements of aromatic herbs such as sage, rosemary, thyme, oregano, etc. The use of wood means that the paella has a slight smoky taste after cooking, which increases the richness of flavours and aromas. 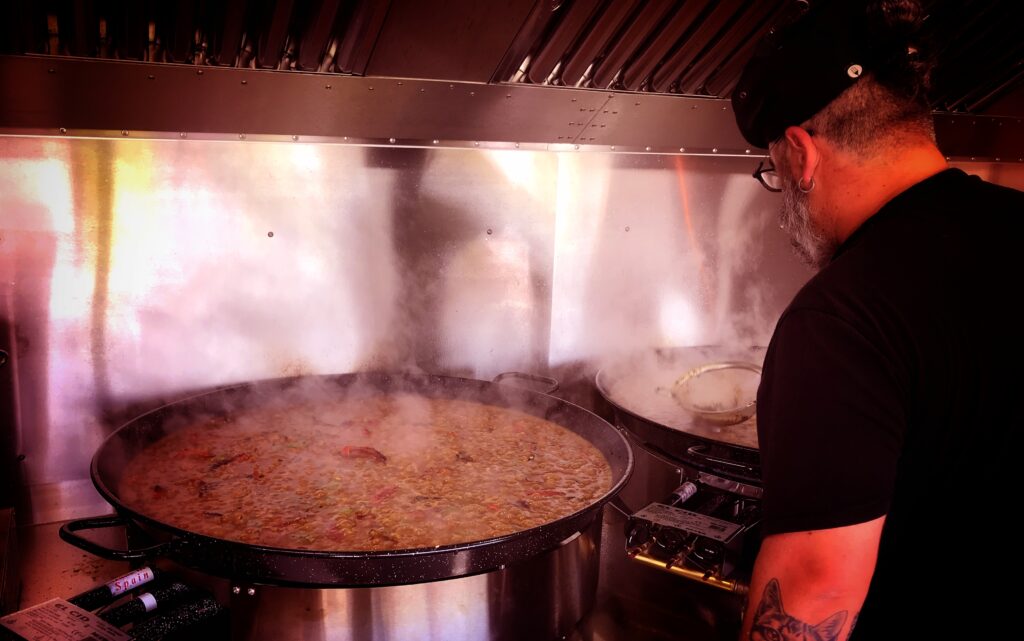 Nowadays, paellas are cooked on an apparatus called «paellero or paellador» fuelled by a propane gas bottle, and is composed of concentric circles where the flames come out. In some cases there are built-in electrical sources (stoves). You can also find an accessory for gas stoves similar to the one mentioned, but which is connected to the outlet of one of the gas burners of normal cookers (removing the original burner first); Salvador Ten Montoliu (1897-1974), chef and inventor, is credited with having registered the patent for the first gas paella heater in the 1950s. 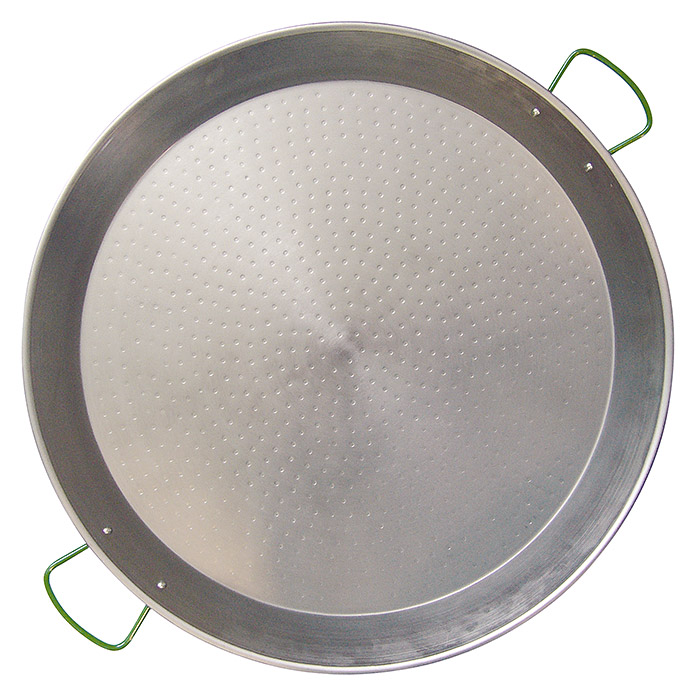 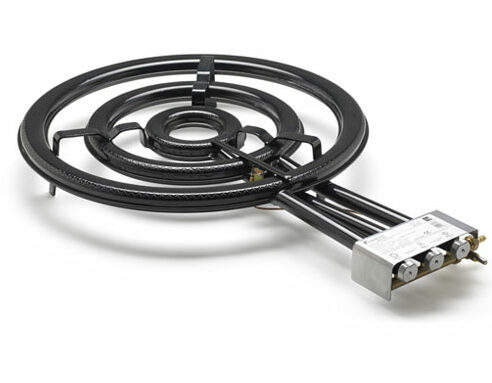 For perfect results, the paella must be perfectly level before and during cooking. Traditional recipes mention, almost without exception, “high heat” during the first phases of cooking. The pan (paella) should rest for about five minutes after cooking. It is a popular rule in Valencia that the final rest be done on a bed of sand, never of stone or cement. Perhaps it is due to a matter of thermal conductivity and speed at which the Paella loses temperature, which should be as slow as possible.

Each rice recipe needs a specific kind of rice variety, and exactly the same happens with paella. Spain has its own varieties of paella rice. Paella rice must be medium sized and thick, as you see can in the photo below. Best quality rice produces best quality paellas, because these kinds of rice were created to absorb the cooking stock as much as possible.

We use ONLY the best rice, a Spanish variety called “BOMBA”. 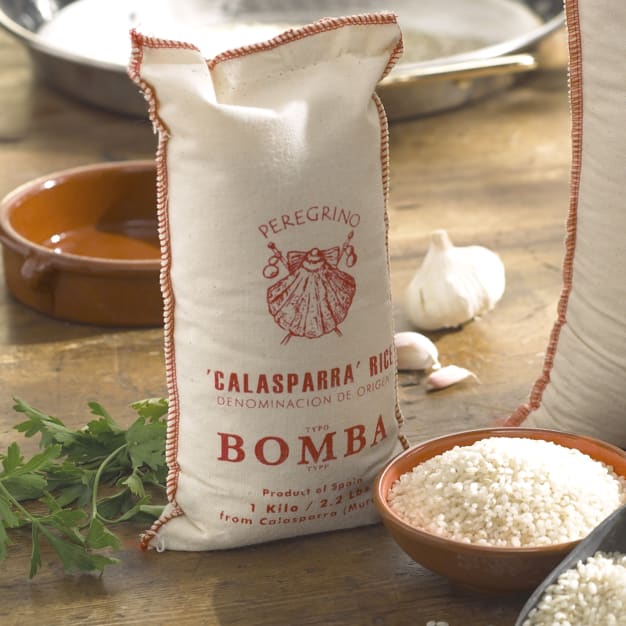 It dates back to the rural areas of  Valencia between the XV and XVI centuries, due to the need of farmers and shepherds for an easy meal to prepare and with the ingredients they had on hand in the countryside. They always ate it in the afternoon.

It is not known if seafood paella was born at the same time as the paella in the field, but by the sea there are different ingredients that allowed this tasty alternative to develop.

In its origins the ingredients of paella were birds, field rabbit or hare, fresh vegetables that were within reach, rice, saffron and olive oil. This was mixed in the paella pan with water and slowly cooked over a fire made from orange branches, which at the same time give flavour and a characteristic aroma.

What is well documented is the exact way to prepare a paella. The exact origin of the dish is almost certainly located in the rice growing near the Albufera lake. As in most Valencian recipes, olive oil and saffron are essential for the preparation of the dish. We have already said that the traditional recipe was made with fresh meat and vegetables. To give more flavour to the dish, in addition to saffron, a little paprika and some rosemary sprigs are usually added.

In the Spanish Levante region, they tell a story that dates back to the War of Independence about a French general, a paella and a woman who made it. The French general was so impressed by the aforementioned paella that they made a deal: for each new plate of rice, the general would release a Spanish prisoner. The woman used her imagination and a great capacity for improvisation and every day she made a different kind of paella. They say that 176 prisoners were released! 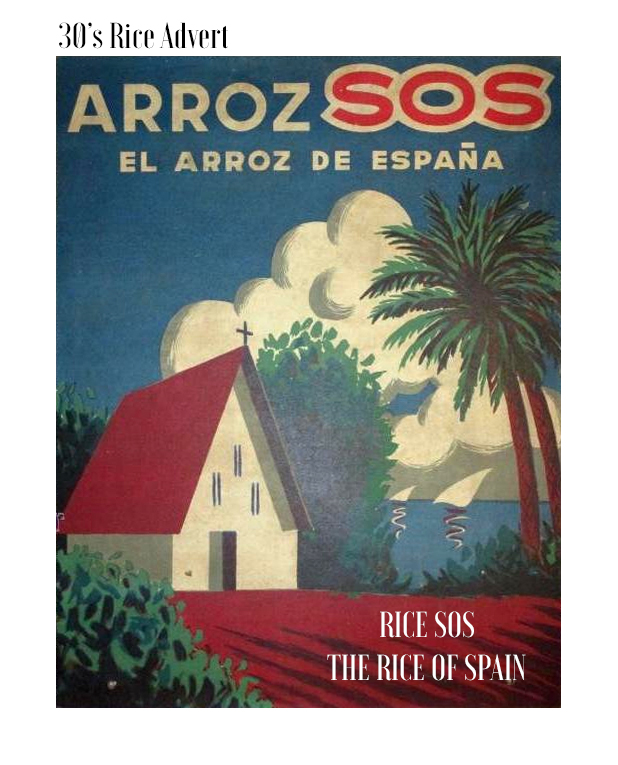 The first documented existence of paella (or Valencian rice) appears in an XVIII century recipe manuscript authored by Joseph Orri: «Notices, and Instructions for the beginner Cuyner». Many technical aspects are written about its elaboration, highlighting how dry the dish should be after cooking. He is a distinguished, well recognised person in the Valencia region.

Already at that time, paella was very popular throughout Spain and began to appear in other countries. A century later, in the 19th century, it was already offered in restaurants in Belgium such as Valencian Rice. In 1896 the Frenchman Eugène Lix, filmed the cooking process of a paella in Valencia for the first time.

Since the early 1800s, paella was part of tradition in the Valencian region and was a symbol of the union of families, who gathered around the table to taste this delicious dish. 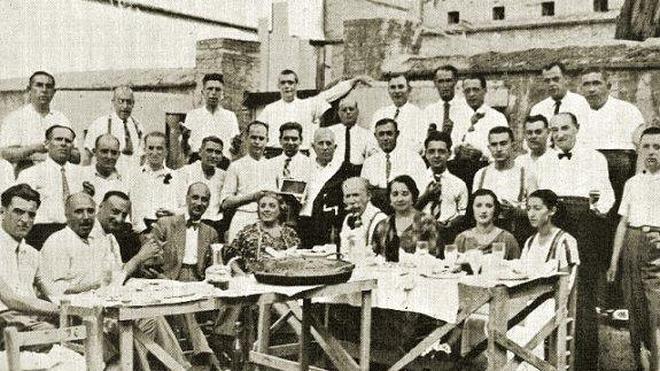 Do you want to know more?
Wikipedia